If you are interested in booking one of our artists, please don’t hesitate to get in touch through the contact form. We are happy to point you in the right direction! It’s all about the music.. jungle music that is!

From his humble UK roots reaching back to early 90’s pirate radio in Birmingham, to having recently been voted “Best Jungle DJ” of 2016 (and runner up in “Best Jungle Producer” category) at the We Love Jungle awards, Aries‘ career has been nothing short of prolific! His constant work with Chopstick Dubplate & Born on Road have seen him tirelessly touring for over a decade, bringing jungle music to the masses! We are very happy to welcome Aries into the Higher Ground family!
(read more) 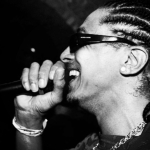 With a musical background spanning 30 years, Navigator can safely be called a veteran of the UK soundsystem scene. From his early work with the legendary Ragga Twins and Unity Hi Power in the late 80’s, as well as his collaborations with groundbreaking artists such the Freestylers, A Guy Called Gerald and Asian Dub Foundation in the 90’s, Navigator played an integral role in the creation of jungle, and has been influencing it’s direction ever since!
(read more)

Brian Brainstorm – hailing from Cologne – has lately been stirring up quite a, well, storm, in the international jungle community. A relative newcomer to the scene, his highly original productions have been drawing a lot of attention from the likes of Serial Killaz, Annie Nightingale and Kenny Ken to name but a few. We’re sure his “Kings Road Dub” on our debut release will be no exception!
(read more)

Lion – mastermind behind the Lion’s Den (studio, label, soundsystem & promotion), founding member of Dub der guten Hoffnung and one of the leading figures behind the Serendubity festival – is easily one of the most active personalities in the Berliner soundsystem scene! Not only that, but his Lion’s Den label played an important role in influencing Higher Ground Recordings!
(read more)

Shortly after moving to Berlin in the mid-2000’s, Jimi came into contact with jungle music and soundsystem culture, and hasn’t looked back since. Through his seemingly tireless efforts in deejaying, organizing and promoting events around Germany – most notably Serendubity and Dub der guten Hoffnung – Jimi has earned a solid reputation as the “go-to guy” for quality jungle and dub-related music in Berlin! His most recent endeavour – Higher Ground – is his way of bringing his musical mission to the next level!
(read more)

his arrival in Berlin some years ago, the good natured deejay, producer, label manager and promoter from San Francisco didn’t waste any time in establishing himself as one of the cities top-ranking junglists! With his Bassism label nights and as a resident of the “VOID” club, Tommy Lexxus soon became a fixture in the Berliner bass music scene. After teaming up with Higher Ground label manager Jimi Handtrix a couple years back, the dynamic duo have been mashing up dances across the city!
(read more)